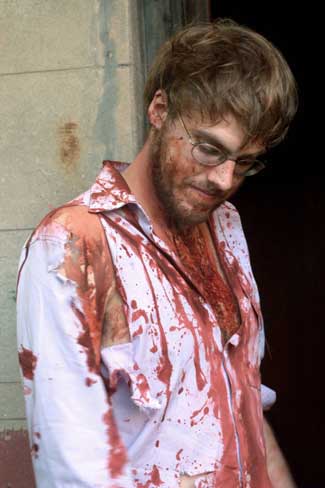 I fell in love with movies through the horror genre. Gore and special FX were my first love. As I grew up, my interests spread out from there to every genre and type of film, but scary movies are still my favorite. John Carpenter's THE THING is probably my favorite. I grew up idolizing Sam Raimi and David Lynch, and I've always loved the handmade energy of Robert Rodriguez's filmmaking. LA HAINE was a big influence as well as BLOOD SIMPLE, BLUE VELVET, DELIVERANCE. The list goes on and on.

2. What was the last memorable movie you saw?
I really loved MONSTERS. I saw it a while back but it's stuck with me the most of anything I've seen in the past year. I like when I can feel a movie and when the filmmaking and the story all feed off each other so well.

3. What kind of music/bands have you listened lately and feel happy to suggest?
I love THE NATIONAL. I love DEER TICK. I love NEKO CASE. I love THE WALKMEN. I really like dark, raw country stuff. THE FLYING BURRITO BROTHERS are an old classic. The best album on earth is Arthur Lee and Love's FOREVER CHANGES.

In the Mouth of Madness

In the Mouth of Madness - John Carpenter 1995

Snow White: A Tale of Terror


I tend to have a pretty wide remit in terms of what I like and am happy to watch many different types of films but I guess what I prefer are dark dramas which tend towards human extremes and well crafted but stranger films that I couldn't imagine myself.
In terms of the former, I'd cite more obvious stuff like Aronofsky, the early work of Nicholas Roeg and Ken Russell, Krystof Kieslowski's whole work, classic Scorsese, Park Chan Wook, Werner Herzog etc, etc.
In terms of the latter, Jodorowsky is up there for me in terms of his ideas. I recently watched Sion Sono's Strange Circus again which is a pretty crazy film which not as many people have seen as should have. Shinya Tsukamoto's Tetsuo is another such example as is Kim Jee Woon's A Tale of Two Sisters. Ichi the Killer is probably my favourite Takashi Miike film and he's pretty varied in what he does but always worth checking out.
Beyond the more obvious weirder/darker stuff, I love Richard Linklater (my first three films were compared to his early works), Francois Ozon, a lot of Rob Reiner and John Hughes to name a few...
2. What was the last memorable movie you saw?


I see a lot of films and am not usually as blown away as I'd like to be but I'd have to say Confessions was the last excellent film I saw which was at Sitges last October. Although it dragged a little 3/4s the way through, generally I thought it was spell-binding; stylistically impressive, structurally bold and suitably dark!

3. What kind of music/bands have you listened lately and feel happy to suggest?


Good question! Well I was at SXSW recently and saw: Duran Duran, The Strokes, The Vaccines, Black Lips and Eli Paper Boy Reed.
New albums by Glasvegas, The Vaccines and Cat's Eyes (lead singer from the Horrors) are all pretty excellent and have been receiving a lot of play on my ipod recently as has the newish album from Manic Street Preachers. Other newer bands I like include White Lies and Crystal Castles and I often listen to a healthy mount of punky stuff - mainly Rancid/Dropkick Murphy's kinda rebel rousing punk. As well as that: Bowie, Muse, Bauhaus, The Killers, The Horrors, Gaslight Anthem, Gallows, The Editors, The Drums, The Big Pink etc all feature on my iphone player...
Thank you Simon!